View an interview with Robin Bernstein

Can Black Children be "Angels"? The History behind the New York Times Insult to Michael Brown

On August 24, John Eligon wrote in the New York Times that Michael Brown, the unarmed 18-year-old gunned down by police in Ferguson, Missouri, was "no angel." The full paragraph read:

Michael Brown, 18, due to be buried on Monday, was no angel, with public records and interviews with friends and family revealing both problems and promise in his young life. Shortly before his encounter with Officer Wilson, the police say he was caught on a security camera stealing a box of cigars, pushing the clerk of a convenience store into a display case. He lived in a community that had rough patches, and he dabbled in drugs and alcohol. He had taken to rapping in recent months, producing lyrics that were by turns contemplative and vulgar. He got into at least one scuffle with a neighbor.

Appropriately, this slur received widespread criticism and caused many readers to cancel their subscriptions to the Times. The police's claim that Brown was a suspect in the robbery at the time of the shooting has now been discredited, and the Times' implication that a teenager deserved to die because he lived in a "rough" neighborhood and engaged in typical teenage behaviors such as rapping, scuffling with one neighbor, and dabbling with drugs and alcohol is the deepest of insults to African American worth. It suggests, as many have pointed out, that black lives don't matter.

A sample of the white folks the Times has called “no angel” includes infamous mobsters, murderers, a pornographer, and a Nazi. Black Americans described similarly by the paper include a basketball player, a singer, criminal suspects, and unarmed men killed by white people.

In response to the criticism, Times editor Margaret Sullivan wrote that the phrase "no angel" was "ill-chosen" and "regrettable." Eligon said, "I understand the concerns, and I get it."

Sullivan's and Eligon's wishy-washy half-apologies are not just inadequate: by treating the use of the phrase as an isolated incident, Sullivan and Eligon ignore the long history of white assertions that black children cannot be angels. The history that the Vanity Fair article exposed is just the tip of the iceberg.

Shortly before the Civil War, many white writers--especially abolitionists--began anxiously debating whether black children who died could become angels, and if so, whether they needed to become white first. As I write in my book, Racial Innocence, the 1862 abolitionist story "Poor Little Violet," by Lynde Palmer, included a very disturbing scene in which Violet, an enslaved girl, discusses death and angelhood with a white slaveholding girl named Carrie. Violet asks,

“[W]hen we goes to Canaan, that old Sambo sings about, may I be your little slave then, Miss Carrie, ’cause you’s allus so kind?”

“I don’t think there will be any slaves there,” said Carrie, slowly, pondering over the matter.

“Why, what will the black people do, then?” cried Violet, with curious round eyes.

“Maybe,” replied Carrie hesitatingly, “maybe there won’t be any black people—you know, Violet, our bodies are covered up in the ground,”—Violet shivered,—“but our souls go to heaven, and they must all be white.”

“Yes, mamma told me that no soul can go till it is washed white in Jesus’ blood.”

“And can my soul be white?” whispered Violet.

The Times's reference to Michael Brown as "no angel" is so deeply hurtful because it extends a historical libel that African Americans, and African American children in particular, cannot be innocent. As the slaveholder Carrie tells Violet, to be an angel is to be white. And in this white-authored text--which was intended to critique slavery--a black girl joyously receives this information with hope that she can shed her blackness, become white, and become an angel.

What is at stake in the phrase "no angel" is the racial distribution of innocence. By calling Michael Brown "no angel," the Times excluded an African American teenager from the realm of innocence. And by doing so, the newspaper of record reserved that assumption of innocence for the white policeman who killed him.

Posted by Robin Bernstein at 10:13 AM 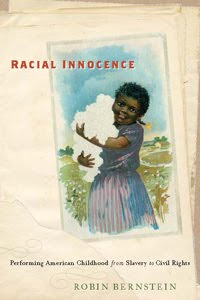 In Racial Innocence, Robin Bernstein argues that the concept of "childhood innocence" has been central to U.S. racial formation since the mid-nineteenth century. Children--white ones imbued with innocence, black ones excluded from it, and others of color erased by it--figured pivotally in sharply divergent racial agendas from slavery and abolition to antiblack violence and the early civil rights movement.

Bernstein takes up a rich archive including books, toys, theatrical props, and domestic knickknacks which she analyzes as "scriptive things" that invite or prompt historically-located practices while allowing for resistance and social improvisation. Integrating performance studies with literary and visual analysis, Bernstein offers singular readings of theatrical productions from blackface minstrelsy to Uncle Tom's Cabin to The Wonderful Wizard of Oz; literary works by Joel Chandler Harris, Harriet Wilson, and Frances Hodgson Burnett; material culture including Topsy pincushions, Uncle Tom and Little Eva handkerchiefs, and Raggedy Ann dolls; and visual texts ranging from fine portraiture to advertisements for lard substitute. Throughout, Bernstein shows how "innocence" gradually became the exclusive province of white children--until the Civil Rights Movement succeeded not only in legally desegregating public spaces, but in culturally desegregating the concept of childhood itself.

"One of those rare books that shifts the paradigm—a book that, in years to come, will be recognized as a landmark in children’s literature and childhood studies. . . . [F]ew scholars can write a sentence like Bernstein can: packed with insight, theoretically sophisticated, and yet lucid—even, at times, lyrical.” Philip Nel, Children’s Literature

"Nineteenth and early twentieth-century material culture comes alive in Robin Bernstein's brilliant study of the racialized and gendered ideologies that shape, inform and continue to haunt notions of American childhood into the present day. Through imaginative and masterfully innovative archival research, Bernstein shows how representations of childhood and child's play are integral to the making of whiteness and blackness and citizenship in this country. Racial Innocence is a groundbreaking book that for the first time illuminates the powerful and critical connections between constructions of girlhood, racial formations and American popular culture." Daphne Brooks, Princeton University

"I know of virtually no one of her generation who writes with this kind of verve, authority and pleasure." Karen Sanchez-Eppler, Amherst College

"Intellectually exhilarating." Martha Saxton, Journal of the History of Childhood and Youth

A "powerhouse of a book"; an "intervention of the highest order." Douglas A. Jones, Journal of Dramatic Theory and Criticism

"Magnificent and stylish... truly groundbreaking." Richard Flynn, The Lion and the Unicorn

"A paradigm-shifting study of major significance." Judie Newman, The Journal of American Studies

"Intellectual espresso." Michelle McCrary, Is That Your Child?

Robin Bernstein
I am a cultural historian who writes about two subjects: theatre/performance and childhood. Sometimes I study these topics together; other times I study them separately. In addition to Racial Innocence: Performing American Childhood from Slavery to Civil Rights, my books include the edited anthology Cast Out: Queer Lives in Theater and a Jewish feminist children’s book titled Terrible, Terrible! My essays have appeared in PMLA, Social Text, African American Review, American Literature, J19, Theatre Journal, Modern Drama, and other journals. I am the Dillon Professor of American History and Professor of African and African American Studies and of Studies of Women, Gender, and Sexuality at Harvard University. I'm also a faculty member in Harvard's doctoral program in American Studies and undergraduate program in Theater, Dance, and Media. With Stephanie Batiste and Brian Herrera, I edit the book series Performance and American Cultures for New York University Press. Visit me at http://scholar.harvard.edu/robinbernstein/home.